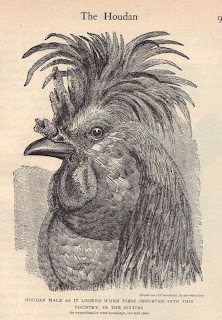 In researching some points for a reader in Indiana, I came across this lovely woodcut of a Houdan rooster. It's included in the chapter on the breed in the Willis Grant Johnson and George O Brown edition of Harrison Weir's Poultry Book (1912). It's credited to "an old woodcut, by permission." Unfortunately , it doesn't say form whom.

The caption reads: Houdan male as it looked when first imported into this country, in the sixties. [That, of course, refers to the 1860s.] It continues: An unpardonable crest nowadays, but still seen.

Houdans became popular in the late 19th and early 20th century. They were accepted into the original 1874 Standard of Excellence, with small V combs. 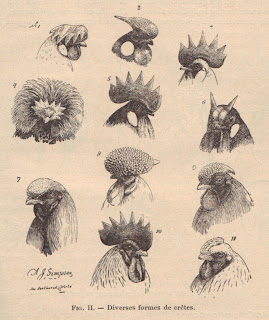 This illustration, from the 1924 Toutes les Poules, shows a variety of combs. The V comb is number 6, second from the top on the right.

These lovely old illustrations are invaluable documentation of what these birds looked like. The care that went into them constantly amazes me.

Posted by Christine Heinrichs at 6:25 PM

Hi Christine! It's me. I find that birds like the Houdan male pictured still crop up among populations of genuine Houdans, I have had two with comb and crest very close to that pictured.

Item #4 in the Toutes Les Poules illustration shows the leaf comb or butterfly comb as it was eventually standardized in France - and the head pictured is that of a French Houdan.

I also wanted to point out that the Houdan as adopted into the 1874 American standard had a leaf or antler comb, not a V comb:

"COMB. Well-developed, red and antler-like, inclining rather backward into the crest; the outside opening like two leaves of a book, the center having the appearance of an ill-shaped long strawberry".

The V comb did not enter the APA standard until later, at the behest of a prominent breeder whose Houdans threw some V-combed offspring which he thought were very attractive. Unfortunately, however genuine his own V-combed Houdans may have been, it was far easier for the majority of Houdan owners to get a V comb by crossing with Polish, and I think this may have been a tipping point for the breed in America.

Thanks for this interesting detail about the development of the comb and how it came to be in the Standard! Standard breeds carry so much history with them.

Forgot to add the blogspot address!

This is a valuable historic document regarding Houdans. Thanks for posting it. I wonder whether a graphics person could restore it and make it available as a downloadable brochure. I have a contact in England I'll mention it to.

Thanks, self! I ran across and enjoyed your pamphlet last year, interested to hear of the personal connection.

Christine, the Houdan head image was a life drawing of a bird imported from France in the 1860s by an agricultural magazine. Pretty nifty really!

Hi Christine, I came back to post a copy of the 1869 original, but the blog comment form does not allow images to be submitted

Send it to me, Christine.heinrichs@gmail.com, and I'll post it. Thanks!

Christine Heinrichs
As a professional journalist, I began writing about heritaqe poultry after my daughter and I acquired our first chickens in the 1980s. Voyageur Press invited me to write How to Raise Chickens in 2007, followed by How to Raise Poultry in 2009. New editions of both were published in 2013 and 2014. The poultry book covers ducks, geese, swans, turkeys, guineafowl, game birds and ratites as well as chickens. My next book, The Backyard Field Guide to Chickens, will be available in May 2016. Traditional breeds are the best choice for small flocks. I continue as a regular contributor to Backyard Poultry magazine.